This morning I woke up, played with my kids, got them breakfast, went out for lunch, covered an event and drove back to KL.

Never, even for a second, did I feel unsafe or threatened by any kind of criminal or tyrant and I expect this is the experience of millions of Malaysians today.

Even those extremely inclined to criticise every step the federal government takes went about their business of being loathsome to the powers that be without having to look over their shoulder every five minutes.

Mat Sabu is still delivering nightly ceramah, Guan Eng is daily badmouthing the BN governments at every level and can go home to their family just like the most staunch BN supporter.

On the internet, voices that hate the BN is as loud, if not louder than those defending the ruling coalition but no one has been locked up.

Because of these factors, I think that there is much good left in this country and this Government.

On the other hand most Malaysians accept that there is systemic corruption in the country and the good intentions of our founding fathers may have lost their spirit through the years and as a result millions have developed strong distaste of BN.

And so I ask my fellow Malaysians if they think that BN is a nice horrible government or horrible nice government?

Do you think it is a horrible government that acts nice by allowing virtually free for all expression is the alternative and social media and also in print, through widespread opposition newspapers

Or is BN basically a nice government that has put in place a good plan for the country but has become arrogant on their success and is acting horrible because they don't listen to the people and are corrupt.
Posted by Shamsul Yunos at 10:02 1 comment:

Maria Shriver and Wan Azizah acting out the same script?

This is an interesting commentary by Dr Steve Pieczenik, a former US intelligence agent whose life became the basis for Jack Ryan, the famous character brought to life by Tom Clancy. He said that victim wife is an established script used in the US every now and then to confuse and raise emotion in the public...sounds familiar?
Posted by Alif Ba Ta at 14:09 No comments:

Ali Baba and the 40 conspirators


If 40 people were to get together to conspire and one of them leaked out the information to the police, would the other 39 just admit their guilt or deny the conspiracy?

Whatever it is, the truth has magical properties, it always finds sunlight no matter how hard we try to suppress it.

I suggest that Malaysians make it a habit to always ask for the truth, regardless of what it may be because only the truth can set us free...like the song says

So whether someone thinks he can hide his habits or whether a group thinks they can keep prying eyes away from their plans, there is an observer who is infallible and a planner who is unrivaled and His plans always prevail.

Shiny, shiny, shiny boots of leather
Whiplash girlchild in the dark
Comes in bells, your servant, don't forsake him
Strike, dear mistress, and cure his heart

Downy sins of streetlight fancies
Chase the costumes she shall wear
Ermine furs adorn the imperious
Severin, Severin awaits you there

I am tired, I am weary
I could sleep for a thousand years
A thousand dreams that would awake me
Different colors made of tears

Kiss the boot of shiny, shiny leather
Shiny leather in the dark
Tongue of thongs, the belt that does await you
Strike, dear mistress, and cure his heart

I am tired, I am weary
I could sleep for a thousand years
A thousand dreams that would awake me
Different colors made of tears

Shiny, shiny, shiny boots of leather
Whiplash girlchild in the dark
Severin, your servant comes in bells, please don't forsake him
Strike, dear mistress, and cure his heart
Posted by Alif Ba Ta at 10:57 No comments:

Proof positive that DAP is anti-unity 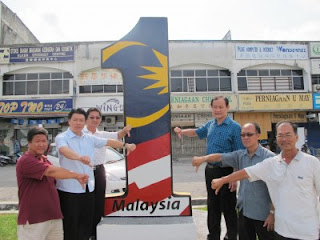 Unity is universal, the path to unity may be many but the destination is one and the same.

The 1-Malaysia approach adopted by the Government is a holistic look at unity in a diverse nation where communities fiercely defend their culture and identity.

Malaysia is unique on the world stage in that we have staunchly resisted becoming a melting pot, we live in the same country but practice distinct and sometimes divergent cultures and religion and this is not something that is easily understood by anyone living outside of the country.


DAP can be open about their Chinese chauvinism or religious inclinations but to reject a call of unity is to reject what is good for the country.

That said I am not surprised with their stance, in the many by elections and the Sarawak state election where the party was involved, their style of campaigning has been consistently abrasive, confrontational, accusatory and generally divisive.

Their call to Christian voters in Sarawak to reject Barisan Nasional on the basis that it is anti-Christ because the issue of kalimah Allah has yet to be resolved thoroughly demonstrates clearly their immaturity  and is one of the clearest argument against allowing the party to have any strong voice in a multi-cultural and multi-religious community that has been embracing unity for more than half a century despite going through hundreds of years of colonial conditioning of divide and rule.

Tragic events in the past has rammed home the fact that the DAP is arrogant and insensitive to the sentiments of others when they get even the slightest whiff of power and this is evident in their leadership's habit of running down anyone and everyone who dares to criticise them.

Their behavior is strongly reminiscent of the Malayan Communist Party that lashed out against anyone who they see as opponents or even those who declined to sympathise with their cause.

If you don't believe me, go and check Roket, Suara Keadilan and Harakah and see if there are any articles criticising their leaders, then go and look at their top bloggers and see if you can find criticism of  their parties.

DAP is leading a coalition of political convenience that cannot even bear to be criticised before the gain power, can you imagine the atrocities they would committ to silence the opposition if they ever form the Government?

The DAP is also famous for their 'Do as I say, not as I do' attitude.

Lim Kit Siang and his son Guan Eng can speak on the same stage about the dangers of nepotism without the slightest hint of irony.

Lim Guan Eng can accuse the BN Government of victimising the people without flinching at the sight of residents of Kampung Buah Pala being thrown out on their ears as a result of his seal of approval on the project that caused their despair and he will talk his head off about the importance of open tender and transparency in government acquisitions and in the next breath say why a negotiated contract is the best way forward for the Penang free Wifi project...which, by the way still tastes like pie in the sky.

DAP will shout at the top of their lungs about Malaysian Malaysia even as Malays are being victimised and virtually chased out of Penang Island.
Posted by Alif Ba Ta at 22:47 3 comments:

The twist and turns of slimy politicians

Hi I am back after my earlier blog was hacked and the domain name quickly grabbed by persons unknown and after blogger.com was down for a whole day for reasons that are still unclear...

The video above was part of one of the earliest postings I made for my original blog, Marahku, My Anger it may be yours too..

It is a very good example of the way Opposition politicians will twist and turn and colour their opinions and statements just to make the world fit their tinted and tainted views.

BTW, do you notice how little of the proceedings from the Royal Commission of Inquiry on Teoh Beng Hock's death is making it to the pages of Opposition blogs...just because it is bringing to light their misconduct, corruption and abuse of power